Somewhere around August 2004, I started a swing dance in Pittsburgh, PA. The entire venture has been sometimes tiring, often spectacular fun, and always a unique experience. If you want to add spice to your life, there's little you can do that's more interesting than start running a dance.

Believe it or not, one of the most difficult things you will encounter when starting your dance is deciding upon a name for the dance. The name is critical. It is the first impression that dancers will have of your dance, and it will guide the atmosphere and expectations of dances to come. Screw up the name, and you doom yourself to failure. Of course, being me, on my name quest, I thrust deeply into the recesses of my weirdness, and pulled out a plump, juicy Chicken Swing. "Chicken Swing" was the inevitable culmination of a long sequence of reasoning and logic, the story of which I will now reveal.

In the month or so leading up to the dance, it was clear that we needed a name. I made the observation that in the field of swing jazz, the names of dead, ancient candy bars have made great namesakes. It is an unwritten rule --- Name your band, event, or dog after a candy bar, and it shall go forth across the land and thrive.

My second piece of evidence turned out to be apocryphal, but at the time, undeniably proved the rule for me. In 2003, I went to Cleveland for their Lindy Exchange. The first night's dance was located in a venue called the Sky Bar. Amazingly (to me), this was also the name of a candy bar, also made by Necco, starting in 1938. While this bar is apparently "not dead yet," it seems to be in its final throes. To me, Cleveland's Sky Bar was a thriving swing dance venue because it shared its name with the candy bar. A year later, however, I learned that Cleveland's bar was really named the Spy Bar, which was never a candy bar. When I learned this, however, the Spy Bar has stopped holding swing dances. As far as I'm concerned, this just goes to further prove my point: When their name was the Sky Bar, they thrived; As the Spy Bar, they failed. 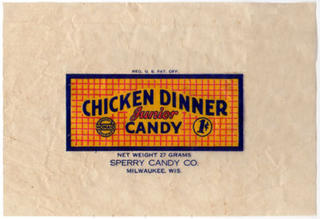 With this evidence in hand, I knew I must name my dance after a candy bar. I searched long and hard. I found dozens of names. I found the Abba Zabba. I found the Curly Wurly. And I found the Chicken Dinner. These were my three finalists. I decided that I liked the last one the best, so"The Chicken Dinner Swing Dance" might be a fine name. The other names sounded too futuristic, or too random for me. The Chicken Dinner even sounded tasty, a chocolate-covered peanut roll of some sort. Nearly everything was perfect. The only problem was its length. It failed to roll off the tongue. My plan was doomed.

I struggled with the name for a while longer. Then, magic happened. We piled into a car to drive to Ann Arbor Michigan, for their first Lindy Exchange, EAT ME 2004. During the 6 hour car ride, we got to talking about the name. Sitting in the back seat with Laura and Sarah, I told my story, and my proposed name. Sarah had an idea. Why not just call it "Chicken Swing?" The idea was brilliant. Somehow, I was able to perform the mental gymnastics to contort the world around me until it brought me to "The Chicken Dinner Swing Dance," but I failed to see the obvious transformation to "Chicken Swing." I suspect that this is a sign of some deep-rooted psychological disorder, but I digress.

Thus, the name Chicken Swing was born. As if to prove my theory, after a year, the dance appears to be successful. People come. People dance. People make friends. People ask me why on earth I would name it "Chicken Swing."